When i was a kid, I specialized in sport at a pretty young age. Once I began playing football, I loved the sport and often played multiple seasons per year (summer and fall). Even though I ended up playing 16 seasons in my career, one aspect of my game wasn’t properly developed until near the end of my career - that was my speed.

For all the seasons I played, and drills I ran as a football player, I was never taught to run faster. It wasn’t until I reached the University level that our team employed a speed coach (aka track coach). Until that point, if I had gotten faster, it could only be attributed to general growth and development, as I also didn’t begin training consistently until university as well. After we began using this coach as a team, I spent two years training with him individually to improve myself, as I was on the slower end of the spectrum for defensive backs. The truth is, I didn’t actually make progress on my speed until I really improved my technique and trained specifically on the track. And when I say “make progress”, I mean measurable differences in speed. 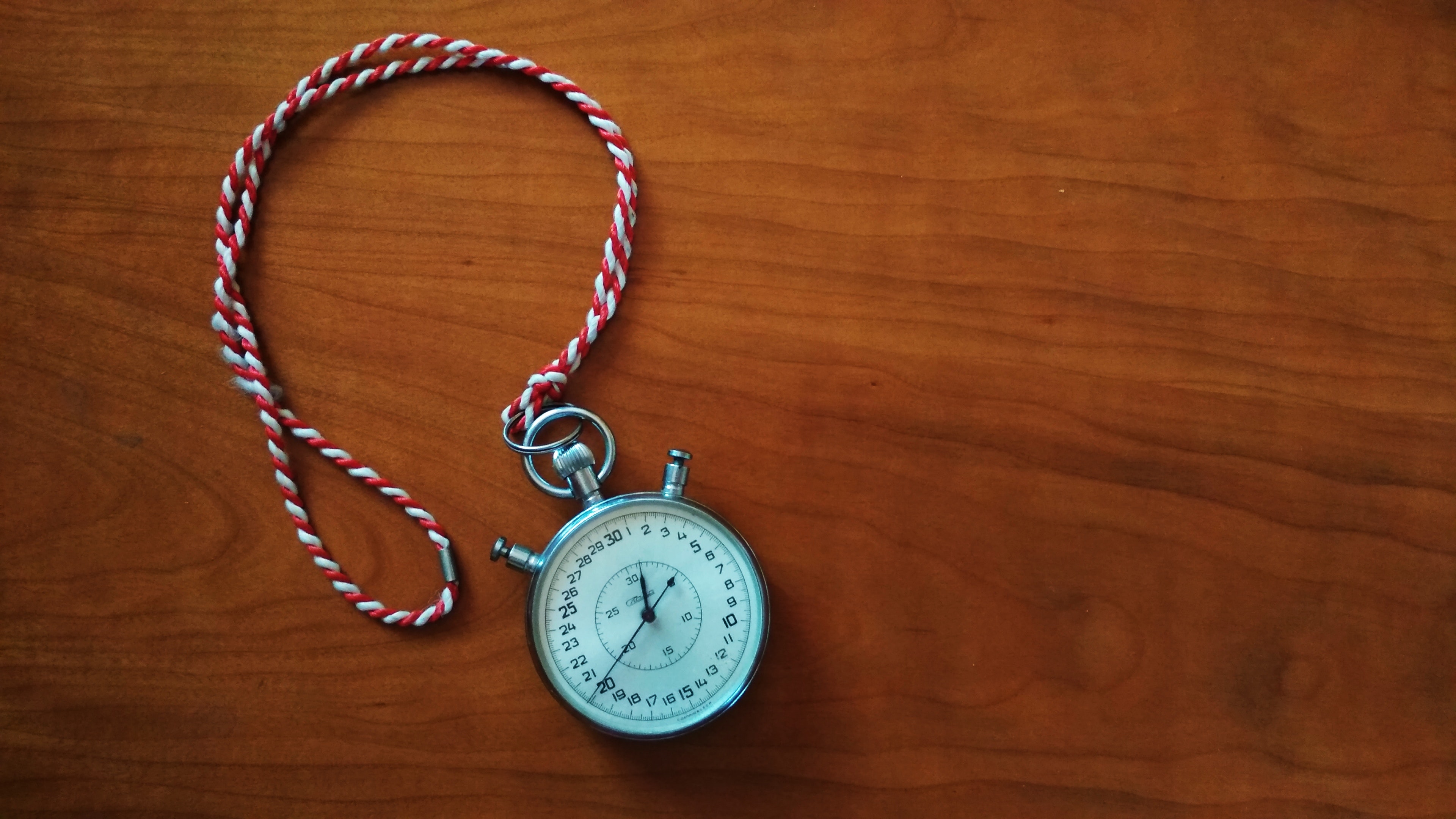 Timing can be simple

One of the funniest things to watch as a coach are the people watching 40 yard dashes. Do you know how many times an athlete puts down a mediocre or bad time and someone watching says, “that looked fast”. One of the most untrustworthy things is how something looks, especially when we talk about speed. Something many people fail to remember is that speed is a specific measure of distance traveled over a period of time. The only way that speed improves, is if we improve that ratio. This can be achieved through a number of processes, but at the end of the day, you’re either faster or you’re not.

HOW DO YOU MEASURE PROGRESS ON THE TRACK

If you’re a coach and speed falls under your responsibility, it’s absolutely necessary that you make progress with your athletes.

Making progress with speed athletes is very simple to measure. You need to run a measured distance and collect an accurate time. That’s it.

If you coach for speed, you need to find an accurate way to collect times. There are many options right now so there aren’t many excuses. I love using the freelap timing system but I’ve also had plenty of success using the mysprint app as well, so cost should not be a deterrent.

Writing it out makes it seem silly, I know, but the truth is that most athletes in training don’t capture sprint times. I train athletes at a public track and it’s rare for me to see other groups or teams collecting times for their athletes. They run down the track repeatedly with subpar technique, very little coaching, and no objective feedback on their actual output and progress. If there’s a recipe for success, that isn’t it. It all starts with measurement.

HOW OFTEN SHOULD I MEASURE

Every coach will differ on their ability to manipulate technique, but every coach should be able to capture the numbers of how fast their athletes are. No matter how something looks, the time on the watch is the final straw. The time is what wins track meets and makes a team in training camp.

If you’re new to collecting times, you first need to establish an objective measurement that you will have the opportunity to repeat. That means:

Then, introduce your athlete to the tests you want to perform and try and set up a schedule with them. If your athletes are involved, it will make testing a much more enjoyable experience for everyone.

If your system is efficient and you have access, it doesn’t hurt to collect times every session. As you progress in your analysis, you can even identify when athletes are fatiguing within each session. This shouldn’t be your starting point though.

Start by collecting times once per week or once every other week. This will provide a solid amount of data over a few months. If your testing is too sparse, you will not have time to make adjustments to your programming, or the resolution to hypothesize signal from noise.

Running faster is similar to weight training, if the numbers aren’t changing, there’s a problem. This should be true for the majority of athletes, unless you’re an experienced sprinter who is reaching their peak. For the sake of this article, we’re assuming that most of the athletes I’m discussing have some room for improvement.

That’s the first thing you need to consider - what system can I put in place to be able to collect accurate times frequently and efficiently?

I personally don't like taking hand times, because i can feel my own influence on the times. Sometimes I'll feel too early, sometimes I’ll feel too late. To solve those issues, I use something electronic.

When we talk about collecting sprint times, they must be recorded. Do yourself a favour and keep all of your data in a database. Keep it ALL! Even if you don’t know what use you have for it now, you may soon discover different ways of analyzing it. Plus let’s be honest, keeping a spreadsheet on google drive or dropbox really isn’t much trouble at all.

Also, one other advantage of keeping your data in the cloud? You can share it with fellow coaches for different perspectives.

Some coaches create team leader boards, some coaches send personalized report cards. Whatever you decide to do, collecting all the data you can gives you the ability to make use of it in many ways down the road.

One of the great things about tracking your sprint times is that you are better equipped to make projections. Last year, I had a bobsleigh athlete who had just finished his season and was looking to make some major improvements in the off season. In this case, we’re talking about January until August, more or less. Going into that season, his speed wasn’t where he wanted it to be and the season also took its toll on his body.

We had from January to August and for him to make standard, we needed to hit (ideally), below 3.9 in the 30m sprint. Although I didn’t use the same timing system they would use in testing, we tested them both to find the relationship so we could make projections on his progress. 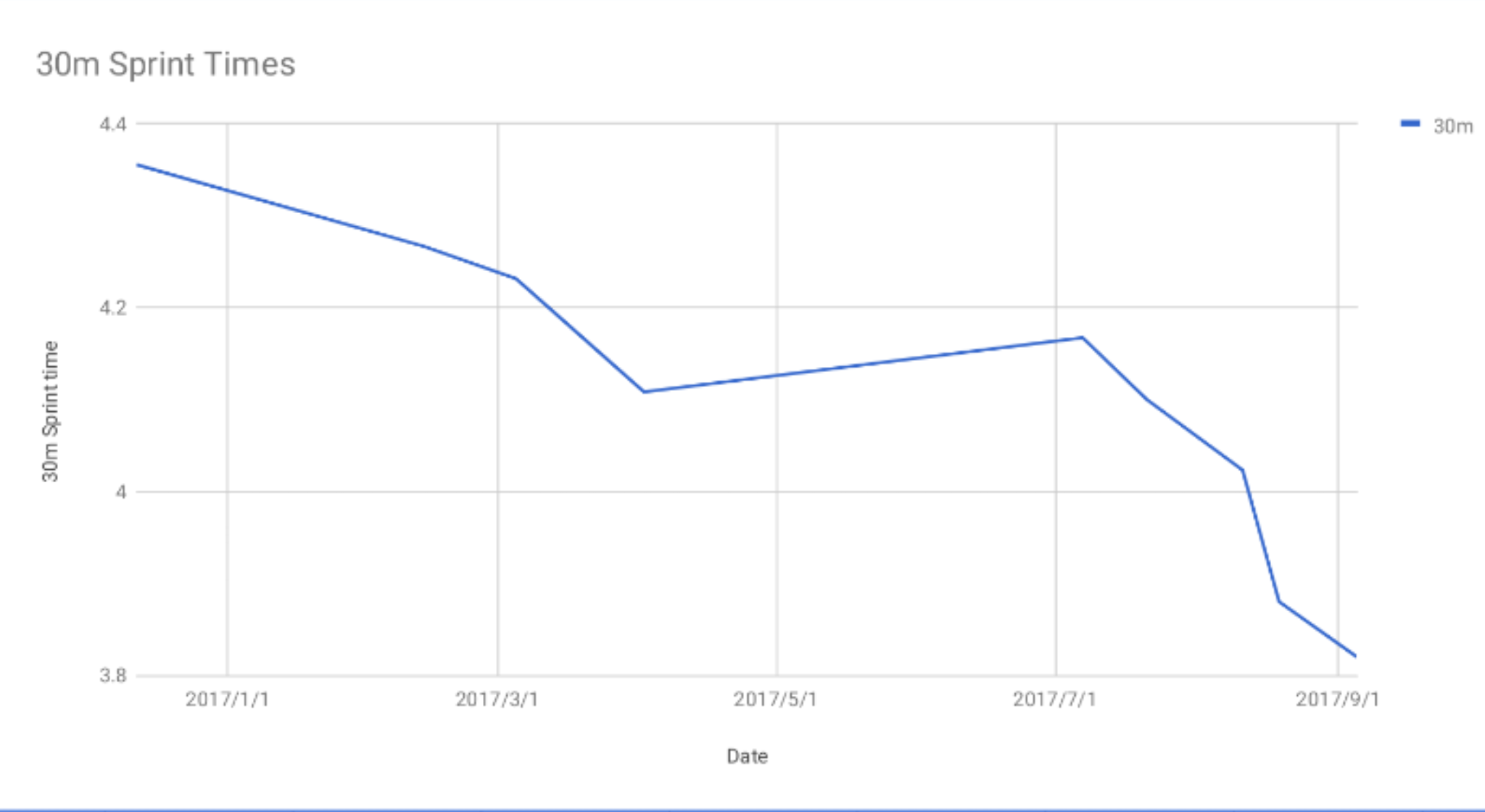 The chart above is a collection of his times between January 2017 and August 2017.

Overall,  during our testing he went from a 4.355 in January to a 4.023 in August. In National testing he went on to put down two times below 3.9 with their timing system.

Although I didn’t know exactly how he would do, the fact that I was recording regular times gave me feedback that we were heading in the right direction. From a feedback standpoint, we also noticed how his times and jumps (we tracked jump data as well) reflected the intensity of his program. I noticed this more so with jumps, but speed will show similar results. If you’re not satisfied with the times you’re collecting, first check to see how much volume and intensity they’re doing in their training program. Try retesting during a deload, or a more recovered day and see if it’s a better reflection of where you want to be. If you still don’t see what you like, something needs to change with your coaching/training.

At the end of the day, we have a major problem with how speed training is viewed. Most sport coaches and even some strength and conditioning professionals think that it will simply improve on its own. Sprinting is the base of so many sports and unless you run track, most teams aren’t training to improve it.

If you’re a high school or collegiate football player, you should see improvement in your 40 time year after year, end of story. The same way your strength will improve year over year, so too will your speed.

For this to happen though, we need more coaches who will actually coach and train speed as its own special quality. This means: not conditioning, not change of direction, not agility, JUST SPRINTING.